We arrived in Hill Country Texas yesterday and have been having the most wonderful time. We went hiking yesterday and this morning. This afternoon we spent our rainy time at a winery and then had all you can eat catfish for dinner at the Chevron station here in Stonewall. Apparently President Johnson was a philanderer of the first order. Time to hit Luckenbach for a night of dancing y'all. 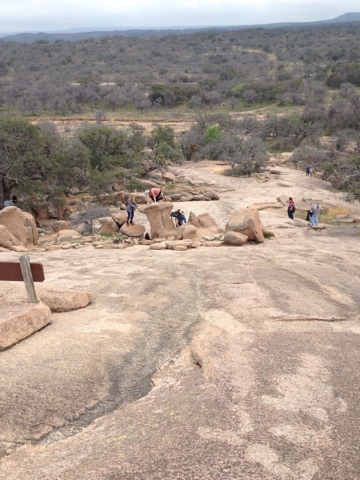 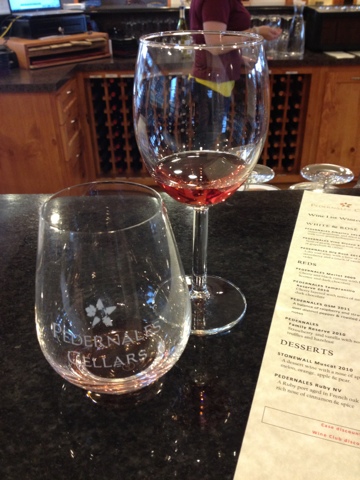 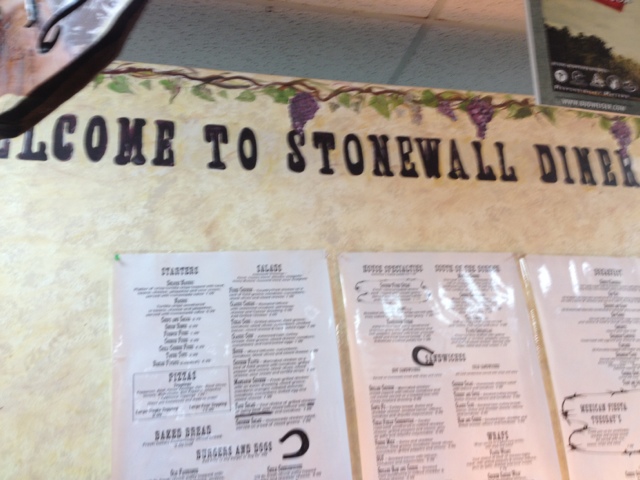 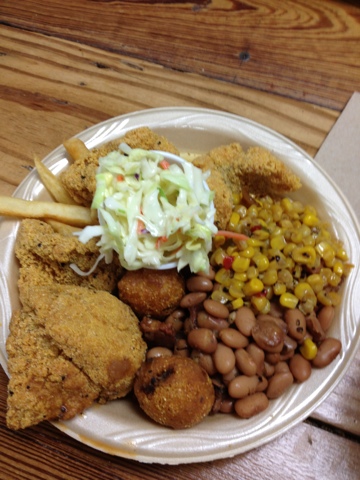 Posted by Keswickian at 9:11 PM No comments:

I love a smoothie for breakfast and the one's I make only take about 3 minutes to make in the morning before work. 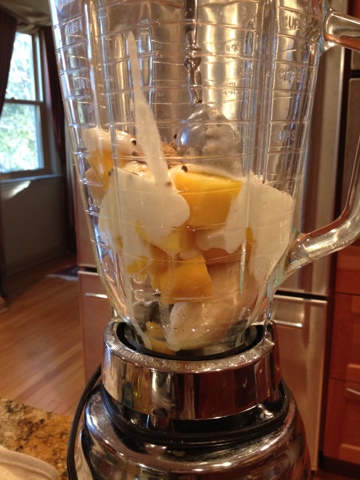 I buy frozen mango chunks from Trader Joes. I usually put in about 10-14 chunks depending on the size. The banana goes in first, then the mango, after that about a cup of yogurt. In the summer I throw in a couple of ice cubes. 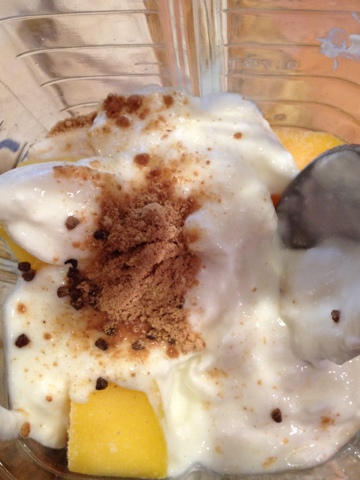 This is what turns it from a mango smoothie to an Indian style mango lassi style drink. Put in between 1/4 and 1/4 tsp ground ginger and about 1/8 tsp cardamom seeds. Blend this all up and voila BREAKFAST. Pour it into a hot/cold cup and you have a portable one to boot. 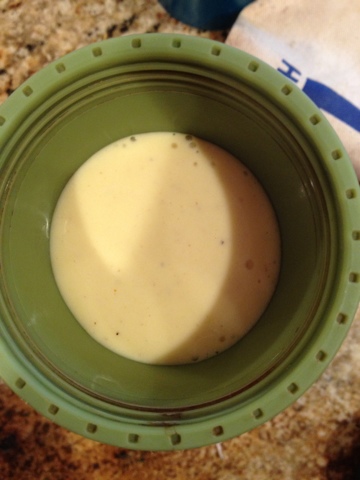 Posted by Keswickian at 6:00 PM No comments:

Have you ever made authentic Thai curry? I have and it takes forever. Last night I had a meeting so I decided to skip the homemade and go for some authentic Masaman curry that the Thai's had prepared for me. 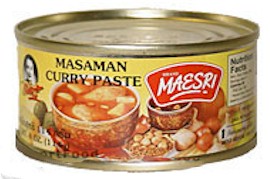 Now it still has to be made as this is a small can. But by following the directions on the can and adding fresh vegetables, you can have a fantastic curry in the time it takes to steam the rice.

First off, open a can of curry paste and a can of coconut milk (not the light stuff). scrape the curry paste and the fatty portion of the coconut into a large saucepan. Boil this for about 5-7 minutes. It will smell fantastic. 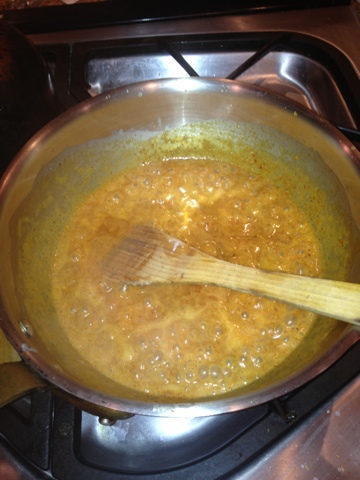 While that is bubbling away, chop up your vegetables. You can use whatever veggies you want. I love to put in zucchini. In this case I had onions, carrots, potatoes and sunchokes. Yes sunchokes, because we had made the Moroccan food a few weeks ago. 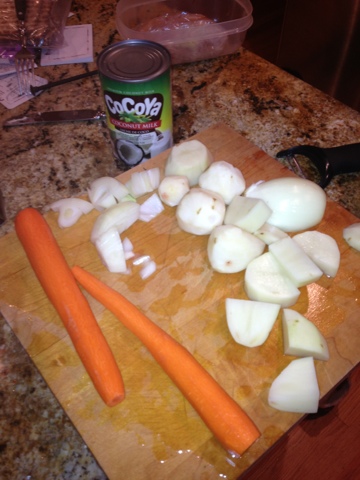 Add all of your veggies to the pot with a second can of coconut milk and let simmer until the potatoes are cooked through but not falling apart. Note: if you decide to use a summer squash or little Thai eggplants (I didn't have either of these and wasn't going to the grocery store) you want to add them about 5 minutes after you've added the root vegetables.


Here you can see the veggies bubbling away. Taste the sauce while it cooks, you may want to add a bit of lime juice or some fish sauce. I ended up adding a half of a lime. 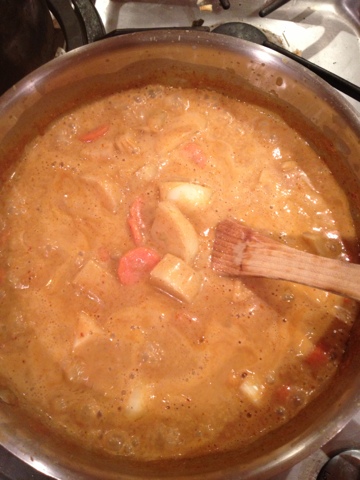 I also added a chicken breast. I always cut it across the wide side. I make slices about 1/4 inch thick and then cut them into about 1-1.5 inch pieces. You could also use shrimp or fish here. I think pork and beef don't go so well with this curry.  Don't add the meat until about 3 minutes before you want to serve. It doesn't take long to cook. 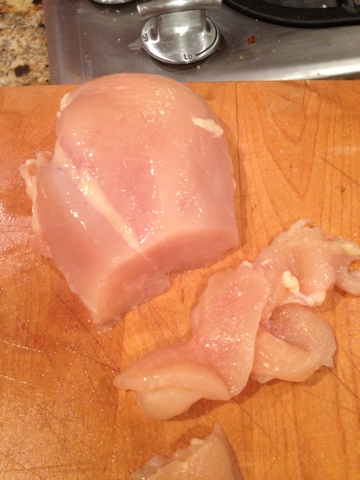 Chop up cilantro and peanuts for garnish. It's going to be tasty!!! 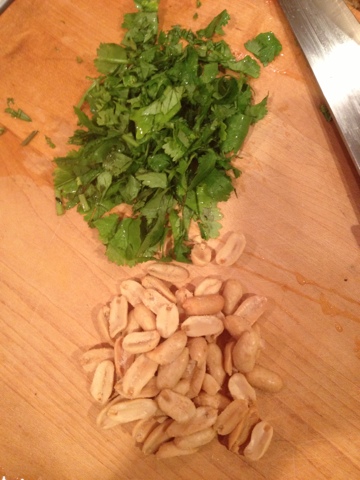 The jasmine rice has finished cooking in the rice cooker. You know what that means, time to add the meat to the curry. Let that simmer for a few minutes and presto-voila you have a 20 minute curry. 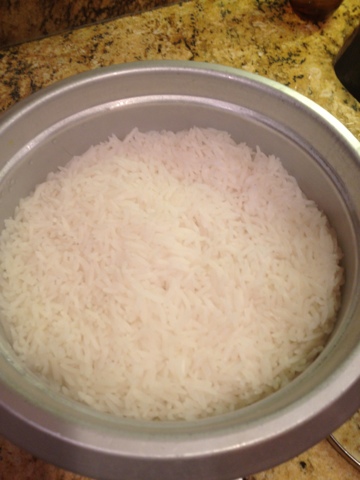 Dish up your rice, add the curry and sauce, garnish with cilantro and chopped peanuts and put the siracha on the side for those that like it hot. MMMMMM tasty. Want a recipe? Look at the can..... 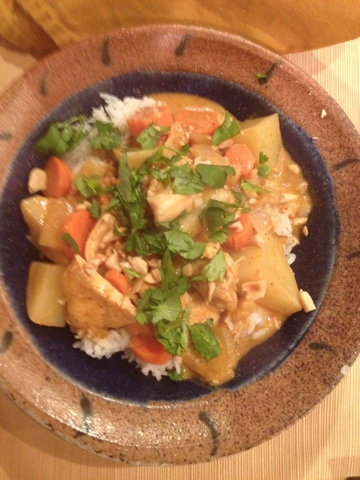 Posted by Keswickian at 5:26 PM No comments:

Last week we decided that Moroccan cooking would be our theme.  We made a number of meals based on the same sauces and dips. The first thing I did was make some cool cucumber salad. I know, I know it's February, but I figured, since we were eating spicy foods we would have something to cool us down. I combine 1/2 cup of white vinegar with 3/4 cup water, 1 tsp of sugar and 1/4 tsp of salt and then I put in the cucumbers and white onion to marinate. You can easily add more cucumbers and onions if you finish the first batch too soon. Let this sit for at least 45 minutes.

First up we made pizza. 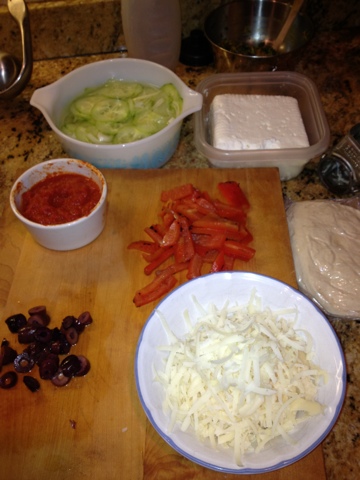 I had made Ottolenghi's Harissa for a cookbook club a few years back and I thought it would make a fantastic base for a Moroccan pizza. Paired with one of my sweetie's frozen pizza dough, I knew it would be fantastic. I roll out my pizza dough very thin on a silpat mat, pricking it all over, and slide it in for about 4 minutes without any toppings into a 450 degree oven. Then I take it out of the oven and off the silpat and dress it with my toppings. 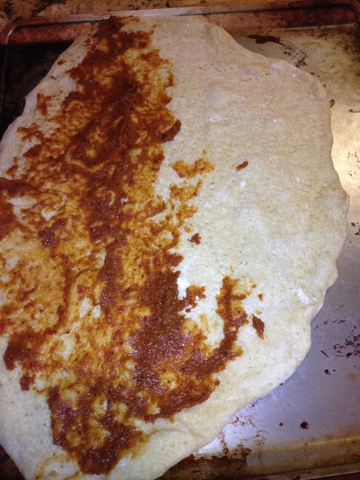 Back it goes into the oven, this time straight onto the pizza stone with the harissa on the bottom, lamb and feta and some mozzarella (or in this case manchego as that's what I had in the house), some olives and roasted red peppers. 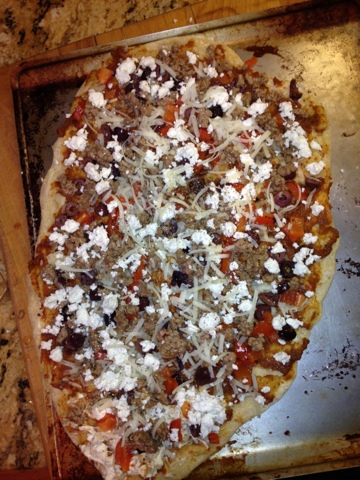 Bake it until it is crispy on the bottom and make sure you let it cool before you pop your beer and sit in front of the television with this beautiful pizza. YUM. 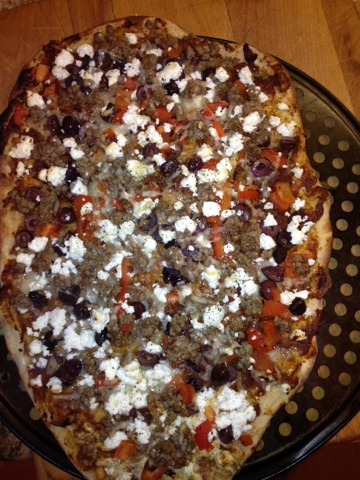 Next up was my sweetie's birthday dinner. We played with lamb belly ribs, coating them with ras al hanout and smoking them in the camerons smoker. We also made a lovely squid salad and finally used our argan oil to make a toasted almond dip, both from Paula Wolfert's Cuisine of Morocco.


Check out the beautifully smoked ribs. 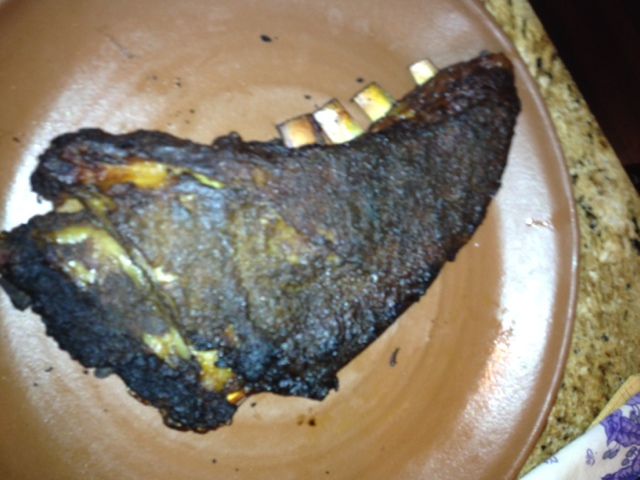 Here my sweetie pounds toasted blanched almonds in the mortar before adding the argan oil. This sauce is soooo tasty. 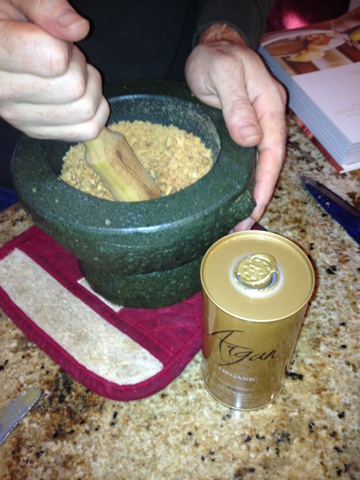 Below you can see the masaman pancake breads we made, the three sauces and squid and lamb. Our beautiful valentine/birthday dinner, followed by CAKE of course. 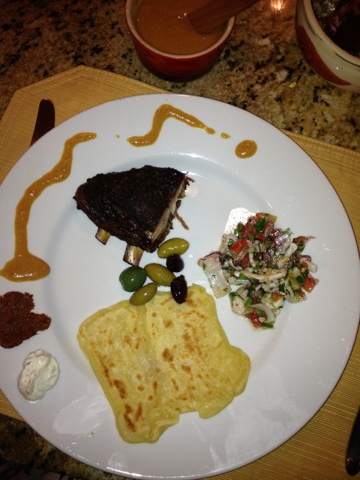 Posted by Keswickian at 6:13 PM No comments:

Yesterday I was sitting at work and got this huge craving for spaghetti with meat sauce. Now if you know me, I'm a bit inclined to change my mind depending on what pops into my head in the next five minutes. So I started thinking about what we had in the fridge and realized that we had 1/2 of a fennel bulb that needed to be eaten.

I've been on a fennel kick lately, making shaved fennel and arugula salads with orange dressing, fennel chicken soup, the list goes on. I Googled fennel spaghetti sauce and ended up at a "Serious Eats" post on   Roasted Fennel Tomato Sauce.  The recipe was from The Splendid Table's How to Eat Supper. It looked fast and FANTASTIC but as a major meat eater, I called  my sweetie and had him take Italian sausages out of the freezer. 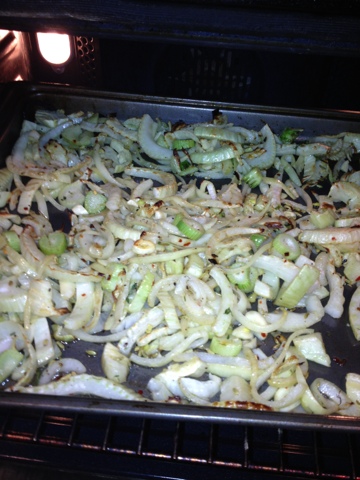 The recipe starts by slicing fennel and onion and 8 yes 8 cloves of garlic. You don't have to slice thin, you don't have to be careful about slicing, it doesn't have to be even, just fast thick slices of veggies. I popped this all in a bowl with the hot pepper flakes, the salt and pepper and 1.5 tbsp of fennel seeds as the 2 tbsp they called for seemed like too many. This got mixed with 1/3 cup olive oil and put on a rimmed cookie sheet. It went under the broiler (note, the Splendid Table recipe recommends roasting, I broiled). You have to watch pretty carefully and stir every 5 minutes or so but once you get some browning, add the diced tomatoes. 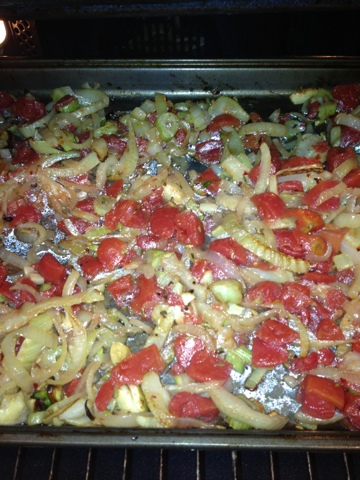 I dont' know why the splendid table recipe wanted you to crush your whole tomatoes by hand, but I find that messy and annoying, besides, diced tomatoes were what I had. I also doubled the amount of tomatoes they called for as I was in the mood for a tomatoey dish. I popped them in and roasted for another 10-15 minutes until they looked a bit blackened. The kitchen was starting to smell wonderful.

In the meantime, I was boiling fusilli and browning sausages. I always brown them, then add liquid and cover to cook them through. Usually I add water (or beer if it's brats) but I had the drained tomato juice from my diced tomatoes. I thinned it with about 1/4 cup of water (about 1/2-3/4 cup liquid total) and added that to the pan. Covered, they took about 10 minutes to cook almost through. When the pasta finished cooking, I drained it, quickly moving the pot back under the colander to save about 1/2 cup of pasta water.

The veggies were pretty much done at this time so I sliced up the Italians, popping them into the pot to let them finish cooking with the steam from the noodles. I added the roasted veggies and poured on the leftover tomato sauce from cooking the sausages. I checked for consistency and only added about 2 tbsp of the pasta water. Here is where they say to dump in the cheese but I just topped off each bowl with some. Served with some warm bread that my sweetie made it was spicy, hot and perfect for a February night. Enjoy! 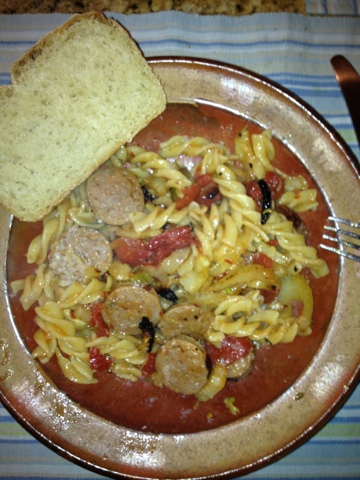 This is a BIG recipe, would probably serve 6-8 people and would be a great crowd pleaser as it's spicy and cheesy and has that beautiful mild licorice taste from the roasted fennel.

Posted by Keswickian at 10:48 AM No comments:

Getting Ready for Texas

Almost ready to tackle Texas in March. We're heading to Hill Country for a couple of days, then San Antonio for a night. After that a week with R&R hiking, biking and canoeing in Big Bend. I'm getting ready by dehydrating muchacha for couscous and boning up on my BBQ rib eating. 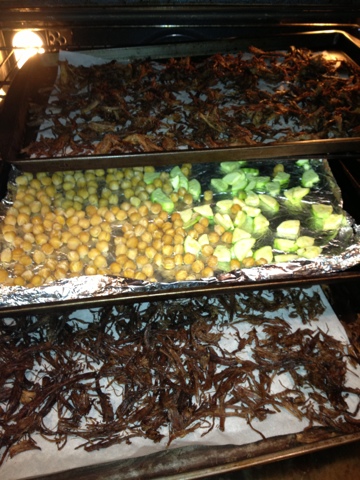 Went to Taco Fiesta and had some Tex Mex chips and salsa, and a couple too many margaritas to put me in the mood as as well. 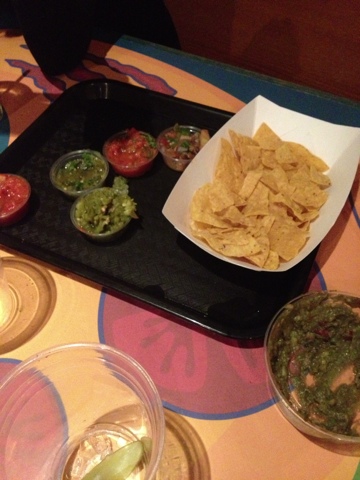 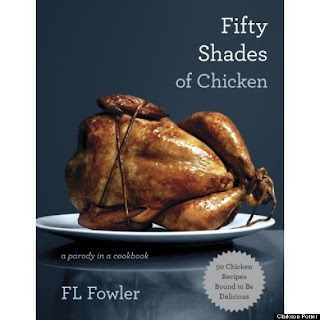